The majority of the cost of most entrées comes from the “protein” component – meat or fish.  Chefs try to maintain a consistent portion size, usually based on weight.  Despite consistent portions, the cost will fluctuate depending on the raw purchase cost and the butchering yield.  Even if you don’t have recipes fully documented and costed for every menu item, as a bare minimum, you should know the portion cost of the protein component of every plate.  Also, you need to track the number of portions in inventory at all times.  This will allow you to identify major cost problems that may be occurring. 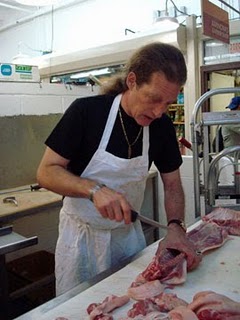 Some proteins are purchased pre-portioned, but you pay a premium, because the supplier has done the butchery work for you and there is no waste.  Most chefs prefer to do the butchering in-house, to reduce the cost per portion.  The butchering process removes the unwanted portions of the meat or fish, such as bones, excess fat and gristle, and cuts the meat into pre-cooked portions.  The weight of the butchered portions divided by the total purchased weight is the called the yield percentage.  The cost per portion is equal to the total purchase cost divided by the number of portions.  The yield will be different for each type of meat and fish.  Since each piece of meat or fish is unique, the yield will vary each time butchering is done.  Good suppliers deliver consistent product, which give consistent yields.
Monitoring Yields
In my restaurant, we maintained a rolling average yield for all major proteins.  The last five yields were averaged to determine the average cost of the protein component of the plate cost.  The average portion cost automatically updated the recipe cost, which was maintained in an Excel spreadsheet.  At a glance, we could see deviations from the normal yield and identify the causes – substandard quality, short-weight, inaccurate portioning or poor butchering.
Perpetual Proteins
Because the protein component represents a large part of the plate cost, it makes sense to keep track of each portion held in inventory.  If the butchering process yields 20 striploin portions, you want to make sure that every one was actually sold.  Here, we want to keep track of the units (portions) at all times.  This is called perpetual inventory recordkeeping.  It is quite easy to do using an Excel spreadsheet.  Yesterday’s units, plus today’s butchered units, less today’s sales equals the number of units that should be on hand.  A quick (daily or shift) count of the units on hand will reveal any shortages that need to be investigated.
Shortages can occur from sales not being rung-in.  The kitchen should never be permitted to prepare a plate without a chit from the POS system.  Ever.  Not even for owner meals.  This needs to be monitored by management at all times.  It is a great idea to test this control (by trying to place an order verbally) from time to time, too.
Be aware that this control only works if there is no collusion among your staff members.  If one of the chefs colludes with a server, the control will break down.  For example, the chef cooks a steak dinner for a server in return for a “free” beer.  Or, a server sees a chef taking food home and threatens to tell the owner unless he gets free food.  Lots of variations on this type of situation.
Sometimes the “void” key is used to delete sales transactions, instead of a discount key.  For example, a customer may change his mind after ordering and the item is being made.  If the void key is used to remove the item from the bill, most POS systems will not show the item as part of the ingredient usage (or as part of the sale quantity).  I prefer to see such transactions recorded as discounts, ideally with categories that explain the reasons for the discounts.  This way, the POS maintains an accurate count of the quantities sold and the reasons why sales dollars were less than the expected (standard) sales – i.e. Quantity x Menu Price.
Sometimes portions go “off” before they can be sold.  These should be documented in a Spoilage log.  If this is a regular occurrence, it needs to be investigated.  Either sales volumes are very volatile, making it difficult to accurately forecast inventory quantities, or the chef needs to adjust ordering quantities.
If the chef improperly cooks the protein, such as burning a steak, this should be recorded in a Wastage log.  Excessive entries in this log indicate a chef that needs to take more care or be replaced.
After taking into account sales usage, spoilage and wastage, the remaining shortage must be theft.  If the kitchen never prepares a meal without a POS chit, the food items are being taken after butchery and prior to being sold.  You may need to install locks to prevent further losses or cameras to catch the culprit(s).  Any persistent problems with one food item are likely to be accompanied by problems with many other food items.
Bottom-Line
Keeping track of the quantities of your high-value proteins in inventory will identify expensive shortages and dictate what needs to be done to minimize the losses in the future.  It is a very easy, simple check that will yield a quick payoff.